Known as the mutable messenger, Gemini hums in this time of year with zippy early summer energy. We might understand Gemini as that social butterfly friend that might be a little flakey or hard to pin down, but once we meet up or get them on the phone, good luck getting them to stop talking and singing our praises!

Gemini is famous for embodying duality, or the “twin” archetype. While some claim Geminis can be “two-faced,” they also can be great questioners and interpreters of ideas, and for this reason can find new ways of looking at traditional concepts. A mutable sign, they are capable of shape-shifting. They tend to be masters of delivering information in diverse ways, and are known to be masterful marketers, communicators and writers. There are some great artists who embody Gemini in beautiful ways! For example, Stevie Nicks is an example of a prolific Gemini songwriter and singer. I remember hearing how after a performance, she likes to wind down by lying on her bed with a spread of magazines, reading and looking through them (magazines are so Gemini!). I also read that she was solicited to write the lyrics for a fellow Gemini artist’s work – Prince’s iconic “Purple Rain” – although she declined to do so, and in fact was inspired to write her song “Stand Back” after hearing Prince’s “Little Red Corvette.”

I love Stevie Nicks and would love to see her wearing the below jewels!
The Mixed-Metal Necklace can be worn as a bracelet or a longer chain necklace, can be wrapped around twice, or worn as a Y necklace. I think Stevie would dig its versatility as a mutable Gemini.

I also think she would love the dreaminess of the Sun & Moon Over Desert Glow Earrings and the fact that the opals and moonstone dangly parts can be removed so she could wear the rutilated quartz studs on their own to mix it up depending on her mood!

I’d add the Chubby Bezeled Oculus Open Cuff to her wrist as it also embodies both her style and the duality of Gemini, with its one purple opal and one green emerald making an unexpected, mismatched pair. This color combination is one some traditionalists might question, but Stevie Nicks transcends style “rules.” The bracelet would look amazing on her wrist while holding a microphone and crooning one of her iconic songs.

While we are at it, I would add the Oculus Green Light Ring with Muzo Emerald and the Holly Ring with Double Diamond Eternity “Halos” to her look to really shine on her hand as she performs. Both play up the airy mood visually and their plentiful oculus openings literally embody the “air” element of Gemini.

I also want to talk about a fellow Gemini rockstar - Prince!

Through his style, he embodies duality through giving both masculine and feminine looks at once. I looked up the meaning of the song “Purple Rain” and found out Prince viewed purple as the blending of the colors red and blue. He thought of the song as about both the end of the world and a new beginning. 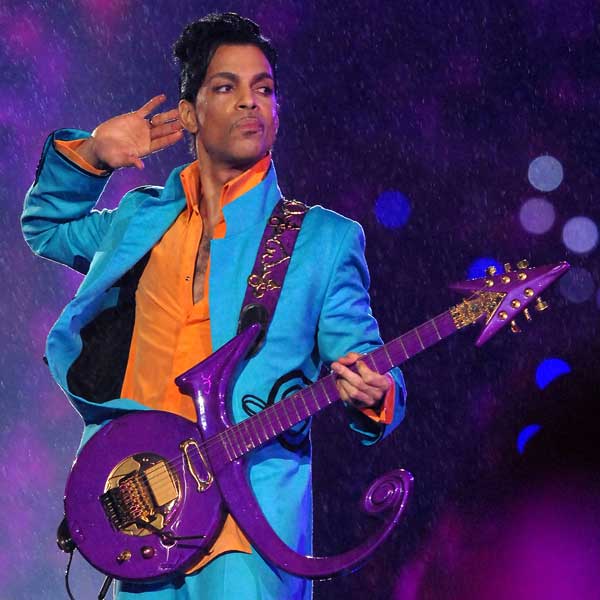 After many years of going by the name “Prince,” the artist changed his name to an unpronounceable symbol. This led many people to simply refer to him as “The artist formerly known as ‘Prince.’ This tells me that this artist is a person who is willing to shapeshift and introduce interpretations of ideas we might have viewed as fixed, such as even the way we name ourselves and each other, and show us that they aren’t as fixed as we might have previously thought!

Based on the above, I would offer Prince some options that he could style in a way that was uniquely and iconically his. He is often seen wearing jackets and billowy, ruffly shirts. I could see him wearing many of our small pins on his lapel, on the shoulders of his jackets, or on the folds of his shirt.

While Prince did challenge what was seen as a traditionally masuline outfit, I did not see him wear a lot of jewelry. However, I did find many images of him wearing iconic statement cuff links. I’d love to see him pulling off our Double Bullet Cuff Links in either silver or gold.

I would choose some rings for Prince to top it off because I believe he would wear rings if I had a chance to style him in modern day! I’d choose the Hollow Ring for him because it is a bit masculine and through its contrast of gold and black, and being sprinkled with diamonds, it embodies both grit and glamour, both industrial qualities and an edginess along with elegance and refinement.

I’d also choose the Dana Bronfman X Muzo Emeralds North-South Marquise Crescent Ring for him because what would be more rock and roll than Prince rocking this gorgeous green rock?

There are a slew of incredible actresses with Gemini as their sign.

From Angelina Jolie, to Octavia Spencer, to Zoe Saldana, Nicole Kidman, Natalie Portman, and Helena Bonham-Carter,  it is clear that Geminis can be excellent storytellers. One thing that I’ve noticed about each of these actresses is that they don’t get boxed in to only playing one type of role. Each of them has proved that they are capable of embodying many different types of characters. We have seen Octavia Spencer in Thunder Force and The Help, Zoe Saldana in Center Stage, Star Trek, and The Avengers; Natalie Portman has been in Star Wars, Closer, Garden State and V for Vendetta. We might know Helena Bonham-Carter more for her anti-heroine role such as in Fight Club and Sweeney Todd, but she also performed in a number “corset core” period pieces such as Twelfth Night, Hamlet, and Mary Shelley’s Frankenstein, encompassing the duality of her characters.

Personally, I am a big fan of all of these actresses I’ve just named, but I am particularly fond of Octavia Spencer and know she would look absolutely gorgeous in the Turquoise Galaxy Earrings! They are very Gemini to me because they are a subtly mismatched pair. They are definitely twins, but they are fraternal, not identical twins. But, you might confuse one for the other if you didn’t have them both side by side to look at (much like twins!). Plus, their bold color would pop and sparkle so beautifully on her as she graced the red carpet.

For a slightly more casual event, I’d dress Octavia in the Diamonds Dropping on Helena Mirroring Earrings because they are also fraternal twins! Consisting of two colors, black and gold, they embody the Gemini duality.  With plenty of sparkle, they have enough glamor to keep a Gemini’s attention (not an easy feat!). They also feel light and airy to wear, so they wouldn’t weigh down her ears as this busy Gemini zips from engagement to engagement.